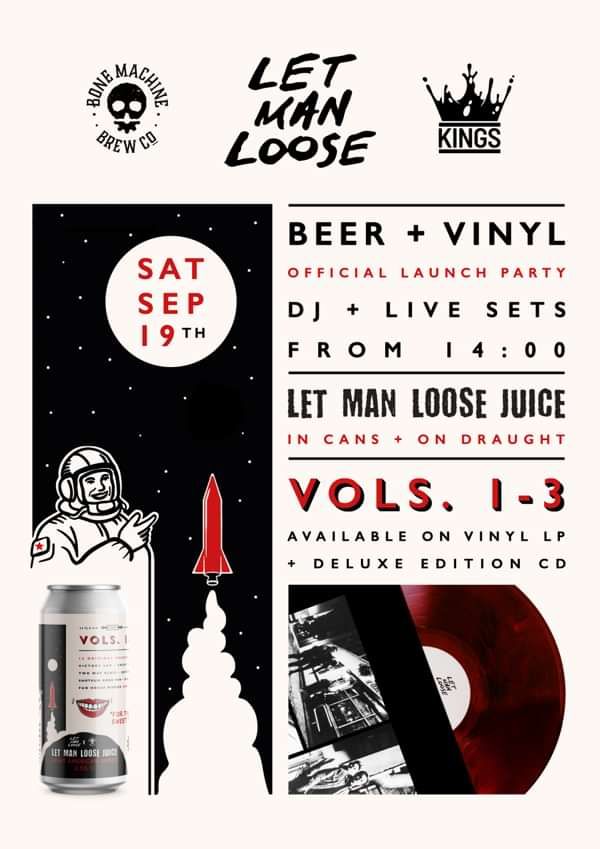 We're collaborating with Bone Machine Brew Co. to bring you our own beer! 'Let Man Loose Juice' is launched at KINGS on Saturday Sep 19, 2020.

The event also doubles as the official launch party for our 'Vols. 1-3' LP. Having released the record in July, we were devastated not to be able to have a party and perform the record in full as a band. Though it seems we're still some way off being able to do that, we decided to put together the biggest and best event we could for the time being.

'Let Man Loose Juice' by Bone Machine Brew Co. will be available in cans and on draught throughout the day and night.

'Vols. 1-3' will be available to buy on limited edition red vinyl and deluxe edition CD.

S T R E T C H will be on hand to cook up the finest Neapolitan pizza around, including a spicy 'Man's Ruin' special just for the event.

We'll be performing a DJ set, featuring tracks from the record alongside our favourite tunes from the alternative rock genre, and making use of KINGS' projectors to show off music videos and live session performances - including some brand new ones you won't have seen.

After the DJ set, we'll be playing a live set outside in the beer garden. It's your chance to hear a selection of our songs performed in a whole new way!